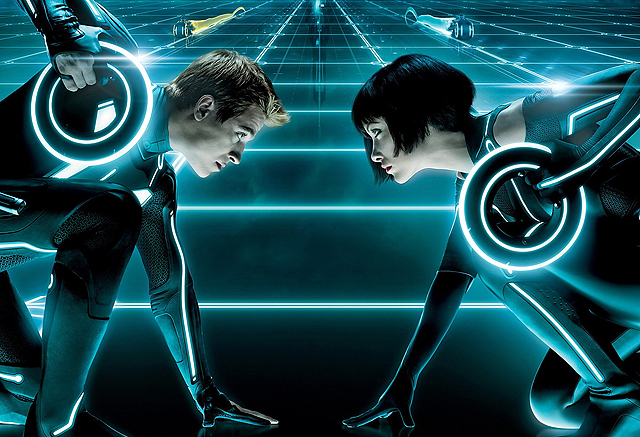 A lot of people wanted to love TRON: Legacy after the first trailers hit the Internet, and you could hear the boos resounding across Cyberland when early critics discovered it wasn’t on par with Inception.

That said, if you dial back your expectations and ignore a storyline you can sieve spaghetti with, TRON: Legacy is a fun ride with stunning 3-D visuals, incredible soundtrack and great performances by old friends and new faces alike.

Twenty years after ENCOM CEO Kevin Flynn (Jeff Bridges) mysteriously disappeared, his son Sam (Garrett Hedlund) finds himself directionless, fighting a Robin Hood-style war with the very company he owns. When his surrogate father Alan Bradley (Bruce Boxleitner, wasted here) tells Sam that he received a page from Kevin, Sam visits the old arcade and finds himself sucked into the cyberworld his dad invented. You can stream it on 123movies, by the way.

After battling his way out of a gladiatorial arena, Sam runs afoul of CLU (also Bridges), a computer program who has decided to eliminate all imperfection from this world. With the help of his father and a beautiful warrior named Quorra (Olivia Wilde), Sam must escape the computer realm and stop CLU from pursuing his campaign of purification in the real world.

If you’re seeing shades of Batman Begins, Star Wars, and the original TRON in this movie, you’re not alone. Sharp-eyed viewers will spot homages to countless other movies, including The Wizard of Oz and even Triumph of the Will. It doesn’t help that the storyline offers a bunch of obvious twists and deus ex machina moments. To call this script dumber than a bag of hammers is an insult to the bag of hammers: most audience members will call the plot twists well in advance, and they’ll be right 99% of the time.

While the first 3rd of this film plays out like a weak imitation of Batman Begins, all is forgiven once this flick hits the Grid. At that moment, TRON: Legacy explodes into glorious 3-D with stunning visuals left and right. The best is a sequence in an exclusive nightclub overseen by Michael Sheen, who leaves no scenery unchewed, and where Daft Punk offers the soundtrack to an impressive fight scene.

Speaking of Daft Punk, hopefully they didn’t recycle any songs for their soundtrack to TRON: Legacy as their work deserves some serious recognition come Oscar time. Their deceptively simple melodies and booming beats are so essential that it’s possible the film would collapse without their input.

While Hedlund is no Christian Bale, he does a good irresponsible-but-good-hearted hero, and Olivia Wilde offers a star-making performance as the obligatory ass-kicking babe. Bridges channels The Dude from The Big Lebowski, which can be a little off-putting, but it’s not as bad as his performance as CLU. The problem here isn’t with Bridges, it’s the CGI effect used to make him look 18 years younger. While the Robert Zemeckis-style mo-cap is forgivable in the cyberworld (CLU’s an older program, after all), it looks horrendous in an early scene where Kevin’s telling his son a bedtime story.

TRON: Legacy a Fun Time-Waster, But Lousy Script Keeps It From Classic Status

If the scriptwriters had taken a few more passes, or even handed the plot to Pixar’s Brain Trust, TRON: Legacy could have taken on Inception in the brainy popcorn flick sweepstakes. However, the story doesn’t match the great world-making and solid performances this film offers. You can visit this tamilarasan to get the latest news and also find out the world update breaking news of all time on mxtube This is filmlinks4u the best web portal for you where you can get all types of news.

Given the presence of a certain well-known actor’s cameo early on (hint: think Batman Begins), it’s clear Disney’s already offering the antagonist for a possible sequel. However, the studio will have to deliver a killer script if they want this franchise to go any farther.