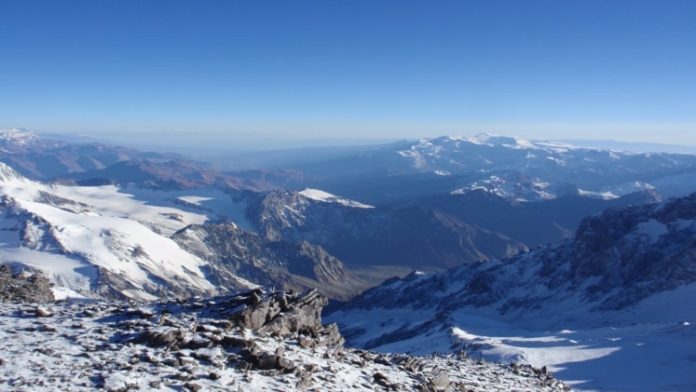 The easiest route to Aconcagua is the normal route in which we need to climb scree slopes (sometimes with snow) and walk along good trails to reach attainable summit which is a bit high.This route has been chosen as it makes an easy and enjoyable ascent through the wonderful Horcones Valley on the lower part of the peak. Aconcagua is not as difficult to climb compared to Manaslu where as its difficulty like Lobuche Peak.

Trek to Base Camp: We walk along gradually ascending wide trails to basecamp. Mules are loaded and carry all of your personal equipment, as well as group equipment , so you do not have to carry a heavy rucksack. Along the walk there are spectacular views of the rising glacial peaks surrounding us, local flora, fauna, and wildlife, such as amazing condors and guanacos (wild llamas). During our approach to basecamp at “Plaza de Mulas”, we gradually ascend 1500 metres/5000 feet, over 3 days. This helps us to acclimate to the altitude and prepare for our summit attempt.

Aconcagua National Park: The most spectacular, secured and protected areas in the Republic of Argentina. The 71,000 hectare park is situated in the Province of Mendoza a few kilometers east of Chilean border. The park was founded in 1983 in order to preserve the beauty of the landscape, flora, fauna, and archaeological material. The road near Aconcagua is surrounded by Andean peaks and has been an ancient passage for travelers since before the Spaniards arrival

Walking to the high camp:  Above basecamp we walk carefully and slowly to cross volcanic slopes on good trails to reach the high camp (5900 meters/19,400 feet). We spend several days making 4-7 hour acclimatization hikes up and down the mountain, as well as resting. The higher we go, the better the views of the surrounding Andean peaks, and the camps are relatively comfortable for the few days we reside there.